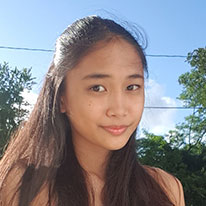 Lexis is in 11th grade and attends Tiyan High School in Barrigada, Guam. She originally found the contest online in 2018, but this is her first year submitting a video, after doing a Google search of online contests. “I wanted a personal project to do outside the classroom. I had never entered a contest of this sort so I wanted to give it a shot,” she said. She decided to focus on Improving Climate Resiliency because she already had the most knowledge on that topic, and decided to focus on agricultural productivity “because the ever growing population is expected to exacerbate world hunger,” she said, adding, “What had surprised me was the projected 70% growth of agricultural productivity needed to keep up with the population in the next decades.” After doing more research, she learned that agricultural flooding is one of the leading causes of declining crop production. “I wanted to find a reasonable solution that farmers can implement on their own within their budget and land needs” she said, which is why she focused on cover crops as a solution.

Lexis has created other informational-type videos for her classes, but this is the first award she has won for a film project, her other awards earned from writing and numerous robotics competitions, such as the FIRST Global Challenge 2019 in Dubai. She said the most challenging part of this project was condensing the information into 60-seconds and figuring out how to smoothly transition between points without being verbose. “To solve this, I wrote several versions of my script and had a few friends review them based on how much they understood my theme and how much they learned” she said. Lexis advises future contest participants to enter the contest, even if they don’t think they will win. She had intended to submit an entry in 2018 and 2019, but never did because she said she didn’t think she had a chance of winning. “This is my first year submitting a video and I definitely wasn’t expecting to win first place. So don’t be discouraged. Do the research, write the script and edit the video because you never know if you could win if you don’t enter in the first place.” Lexis planning to use her award money towards saving for a car.

Lexis was born and raised on the small island of Guam with two older sisters and a younger brother. Unfortunately, due to the COVID-19 pandemic, the rest of the school year has been cancelled for all schools on the island, with no classes being held remotely. Since she was 12 years old, she has had a passion for robotics, which she says funneled into passion for programming and computer science. “I spend my days learning new programming languages and applying them by creating things like websites or Instagram filters” she said. She also loves to mentor and inspire young kids, having taught her own robotics and coding classes and being a camp aid for a Girl Scout’s STEM camp. She said she has experienced sexism within the robotics community and is motivated and inspired by all of the women who persevere in more male-dominated fields, like STEM. “I do wish to become one of the many women that young girls who want to pursue these fields look up to,” she said. After high school, she wants to attend Carnegie Mellon University to study computer science and software engineering. “I believe the future is in technology and I want to do my part in advancing the tech world and making it accessible to everyone.”