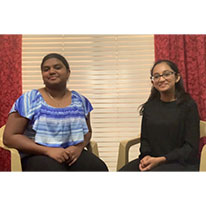 Rishika and Ana are eighth graders at Coppell Middle School East in Coppell, Texas. They’re also best friends and excited to start high school together in the fall. They’re both in the Gifted and Talented program at their school and found out about the contest because the program requires students to participate in a science competition. The pair decided to pursue the contest because they love making videos about different topics and feel that videos are a fun way to educate people. They chose to focus on water systems because they had previous exposure to this topic in school and wanted to learn more.

In addition to being video making aficionados, the duo loves music, so naturally they chose to write a song about the impacts of agriculture on water. They chose to animate their song as a way to draw viewers in and because they both love art. For Rishika and Ana, the most challenging part of the video making process was scheduling around their busy schedules, so they offered some advice, “make sure you have a plan so you can meet up with teammates to brainstorm, and have fun while making your video!”

Rishika has lots of hobbies, she plays the French horn in the school band, she loves to dance and has been doing for 7 years, and she takes lessons in Carnatic music, traditional to southern India where she’s from. Ana is also very artistically inclined and is in the school choir, she also swims on the school swim team.