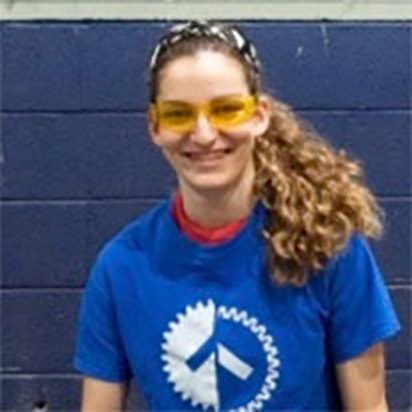 Jensen is in 8th grade and attends Bednarcik Junior High School in Aurora, Illinois. She found out about the contest from her science teacher, whom she says always finds contests for them online. Jensen decided to submit her video in the contest because she’s passionate about climate issues and was learning how to use iMovie. Before the contest, she had also been reading about the link between cows and methane emissions – one of the big greenhouse gas emissions, and the possibilities of insects as a protein replacement instead of meat. “I pretty much jumped straight into this [topic]”, she said when deciding on her video’s focus, due to her familiarity with the issues. However, she said deeper research made her realize how big the problem is, as our world population grows. “I was surprised how many cows there are!” she said as she learned more about how many cows are needed to supply our world’s growing population with a meat-based diet. “And I was surprised to learn how methane and nitrous oxide are more potent than carbon dioxide”, she said of the two of the greenhouse gases produced from ruminant livestock, like cows.

This is Jensen’s first animation-style video, and she used Scratch software to make her ideas come to life. “Getting the Scratch program to function for animation was the most time-consuming part” she said of the video-making process. However, she encourages future participants to put in their all, no matter what challenges. “Never give up, even if there are difficulties” she said. While this is Jensen’s first award for a film, she recently was part of a team of eight students that invented of an interactive recycling bin as part of the Lexus Eco Challenge, ultimately winning $25,000 for her school. A few years ago, she also won first place in a global robotics competition. She became interested in robotics when she was in elementary school, when a school program inspired her. She says her current robotics coach at school, Mr. Sinclair, greatly inspires her today. “He teaches us well and lets us work things out, but helps you when there’s a problem,” she said.

Jensen said she will likely use the prize money towards a robotics project she’s working on outside of school. “I might use it to develop a robot to clean a local pond”, she said. She’s currently attending school virtually, and said she is enjoying the remote learning. “I can get all of my schoolwork done in a few hours and then find more online contests and projects to work on,” she said.