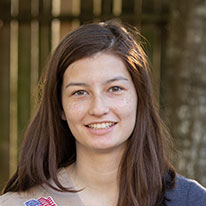 Emma is a senior at Jersey Village High School near Houston, Texas. She found out about the contest from her World Areas Studies teacher, where it was a class project. While scanning the sub-topics this year, she saw “disease evolution”, which caught her eye. “Originally, I was thinking about the coronavirus, then I realized the problem was more mosquito-based, when talking about the connection of disease spread and climate change,” she said. “We’re changing the environment to fit [mosquitos’] habitats. That really surprised me” she said about the connection between human-caused climate change that is making certain places more hospitable to mosquitos. The more she researched, she realized how population growth and density is very connected to mitigating and adapting to disease spread. “I wanted my classmates to understand that relationship, so I wanted to make a good video,” she said.

Emma has made other short films for her Spanish class using the same software, but she said the most difficult part of this project was showing the connection between three huge topics: population, climate change, and disease spread, all within 60-seconds. Her advice to future contest participants is to make sure you know your topic, and make sure you present it in a way that’s easy for people without any background in this topic to understand. “Don’t use too much jargon or make it too technical – introduce the problem and then show how you can solve it” she said. She is going to use the prize money from the contest towards a laptop for college, where she is planning to attend Rice University in the fall and major in computer science. She became interested in computer science after taking a class. “It was very nerve wracking because I was one of only girls in class,” she remembers, but she quickly became hooked. “I realized I didn’t need to know computer jargon, but just have a problem solving mindset.” She is learning programming now and looks forward to continuing in this field.

While this is Emma’s first filmmaking award, she has previously won the Girl Scout’s highest honor, the Gold Star, after she created a community club in 2018 to help girls become involved in STEM. Outside of the Girl Scouts, she’s involved in her school’s Science Olympiad team, where she recently studied the topic of invasive species extensively, so she could prepare to answer questions for her team about that topic. She is also involved in volunteering with a high school club, where she has helped with Hurricane Harvey relief, organizing supplies drives. She has a younger sister who is freshman in high school, and their family has a little pet Havanese dog named “Ella”. She said her mom is her biggest inspiration. “She came to a whole new country and really integrated herself into society here without losing her own culture and traditions”, she said.